Members of the ATE community are acutely aware of the importance of technology in our lives - and the challenges that many of our students face in overcoming technological barriers to access the educational resources that they need to thrive. The “digital divide” is a reality for many of our students - referring to the gap between groups of people in their ability to access, use, and benefit from computers and technologies such as the internet. As devices such as smartphones, desktop or laptop computers, and tablets (all supported by high-speed internet connections) become more central to the way we live - get an education, find jobs, access information, file taxes, etc. - the digital divide threatens to limit some people’s ability to fully participate in society.

These issues have been particularly salient throughout the pandemic, and have thrown into sharp relief the persistent gaps that remain - and the potential solutions to close digital divides based on income, education, race and ethnicity, geography, and disability. Throughout this year, the Pew Research Center has released a series of reports on the digital divide, based on a representative survey of 1,500 adults conducted last winter. Here, we highlight some of the most pertinent findings.

Women are less than 15% of the cybersecurity workforce, but data indicate West is making progress attracting underrepresented groups of students – female, non-white, and low-income – to the Digital Forensics and Incident Response (DFIR) certificate and degree program she created with an Advanced Technological Education (NSF) grant from the National Science Foundation.

This past summer West organized a GenCyber camp for middle school and high school girls at Coastline with funding from the National Security Agency (NSA) and a one-day CyberTech Girls program funded with a U.S. Department of Education Perkins grant. Both are part of her strategy for recruiting females for the DFIR certificate and degree program.

This summer’s program has already yielded some unexpectedly positive results: One of the women from industry who served as a mentor years ago has now become an adjunct instructor at Coastline and presenter at the GenCyber camp. Several other mentors have enrolled in Coastline’s cyber defense courses to help them advance in their law enforcement careers.

“To me those are really great successes,” West said.

The COVID-19 pandemic has dramatically demonstrated the barriers that many students and teachers still face in accessing quality educational materials. It has also spurred many in education to call for making more resources openly available. Open Educational Resources (OER) are digital or non-digital learning resources placed in the public domain or released under open licenses that allow for unrestricted use, distribution, access, and adaptation.

In this post, we highlight projects, organizations, and materials that relate to OER. We hope that these resources can be valuable for educators in the ATE community and that they will be shared widely with students, colleagues, or anyone else who might benefit. Do you have additional OER that you would like to share with the community? We would love to hear from you! Just email info@atecentral.net!

In 2007 when the owners of a nearby winery suggested the Highland Community College-Wamego offer winemaking classes, Scott Kohl knew nothing about wine production. He wasn’t even a wine drinker. But as the director of the satellite campus, he was persuaded and gathered information to create the curriculum for a three-credit Introduction to Grape Growing course. When 17 students enrolled – one drove three hours to attend – Kohl was impressed that the college could respond to an unmet need. Enrollment was similarly strong when the college added an introductory winemaking course.

In 2008 Highland leaders agreed to join the Viticulture and Enology Science and Technology Alliance (VESTA), not only to help the center funded by the National Science Foundation’s Advanced Technological Education (ATE) program expand its online viticulture and enology degree program throughout the Midwest, but to reconfigure VESTA’s curriculum for in-person courses.

“From there things just started to grow,” Kohl said. Indeed they did.

For more than 10 years the small rural college has offered enology and viticulture certificate and associate degree programs. The teaching vineyard it started with VESTA support has grown to four vineyards with 5,200 vines. Most remarkably, the college created Highland Vineyards and Winery, LLC. The limited liability corporation is the business branch of the Highland Community College Viticulture and Enology Program and operator of 456 Wineries, a wine business incubator that is located across the highway from the campus. Income from sale of wine made with the college’s grapes, the rent paid by the wine incubator tenants, and grants help sustain the program that enrolls about 16 students per year. Many alumni are the owners or employees of the 60 wineries that now dot Kansas; the state had 12 wineries in 2007, Kohl said.

With the new school year underway, we know that members of the ATE community may be adapting their lessons and syllabi to accommodate different learning modalities in the rapidly changing circumstances of the COVID-19 pandemic. Even with several semesters of experience, there is still much that we all can learn about effective teaching and learning in remote, hybrid, and even in-person formats.

In the spirit of mutual support and collaborative learning, we are sharing five resources that we believe will be helpful for all educators to strive to make their pedagogy more inclusive, accessible, and useful for all students.

Esteban Montero Chacon, 40, was hired as a residential energy analyst in October 2020 while he was finishing his associate in applied science (AAS) degree in energy management from Lane Community College. By December his boss was so impressed by the way Montero Chacon revamped the agency’s Heat System Crisis program that he told him to apply for the director’s job from which he would soon be retiring.

Montero Chacon did, and in February 2021 he became the director of the Energy Services Division of Homes for Good, a public housing agency in Lane County, Oregon.

“I don’t believe I could do the job [without the program], because number one, that’s how I got here by being an energy technician myself. And number two, is just the fact that I learned a lot not only in the technical field of energy, but there was a lot to be learned about energy policy and politics and all the different things – all the guidance, the regulations, ventilation needs and such – that come into play and represent a big role in what my job is,” he said.

Montero Chacon is particularly grateful to Roger Ebbage, the faculty lead of the Northwest Water & Energy Education Institute at Lane Community College. It was Ebbage who told Montero Chacon of the energy analyst job at Homes for Good in 2020, and it was Ebbage who encouraged him to enroll in the energy management program at Lane Community College in 2017.

Ebbage has been the principal investigator of several Advanced Technological Education (ATE) grants from the National Science Foundation including Award 1601375 that supported the conversion of Lane’s in-person energy management degree program for online delivery. He is currently co-principal investigator of the Center for Renewable Energy Advanced Technological Education, which is hosted by Madison Area Technical College in Wisconsin.

Like many of the career paths available to graduates of ATE-funded programs, welding professionals have a wide variety of opportunities available to them. From construction to manufacturing, engineering to energy, skilled welders are in high demand in a number of critical industries across the country. In many of these industries, welders need only complete a certificate program or two-year college degree to start a promising career at a good salary.

In this From the Archive blog post, we highlight an array of materials created by and for welding programs across ATE to educate the next generation of welders. Our first set of resources include two courses created by the Center for Advanced Automotive Technology (CAAT) in partnership with Roane State Community College. Next up are curricular materials that focus on mathematics instruction for welders, followed by a template to aid instructors in evaluating the welding competency of their students.

If you are new to ATE and would like to learn more about adding your curriculum, professional development materials, or other ATE grant deliverables to the ATE Central Archive, please join us for an informational presentation via Zoom on September 28th at noon CST.

In the summer of 2017 Miami Dade College had zero cybersecurity courses. Today it has a robust, multi-level cybersecurity program.

“COMPASS was the one that took us from zero to 100 in four years,” said Principal Investigator Diego Tibaquirá. The project accomplished so much so quickly that it led to Miami Dade’s selection as EC-Council Best New Comer Award in 2019.

Exciting news - the newest ATE program solicitation is now available from the National Science Foundation! As most of us in the ATE community are well aware, the ATE program emphasizes the education of technicians for the high-technology fields that drive our nation’s economy, with special emphasis on two-year higher education institutions. Through partnerships among academic institutions and industry, ATE promotes improvement in the education of science and engineering technicians, including curriculum development, professional development, career pathways, and other activities.

The focus of the new solicitation is the same as it’s been in years past in that it provides funds to advance the knowledge base related to technician education. Projects and centers are expected to be faculty-driven and incorporate credit-bearing courses and programs, although materials developed through the program may also be used for incumbent worker education.

According to Dr. Celeste Carter, ATE’s Lead Program Director, “This new solicitation further strengthens the role of community and technical colleges in the ATE program and in the education of the skilled technical workforce.”

People become ATE principal investigators (PIs) because they are innovators. They are educators who have ideas to improve technician education and they have obtained funding from the National Science Foundation’s Advanced Technological Education program to test those ideas.

During the COVID-19 pandemic, the creativity and stamina of ATE PIs not only sustained ATE initiatives, in many instances the way PIs responded to the public health crisis helped advance their ATE projects in new and interesting ways.

This blog features the work of Skilled Workers Get Jobs 2.1 and Smart Manufacturing for America’s Revolutionizing Technological Transformation (SMARTT). Both projects switched their professional development programs to virtual formats from in-person workshops with unexpectedly positive results. 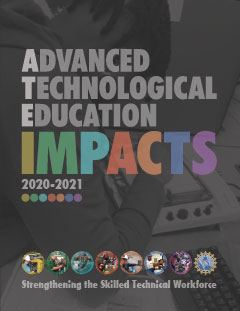