Their approaches to obtaining financial support are different but effective. Ashcroft has obtained funding by submitting proposals in response to “Dear Colleague Letters” from the National Science Foundation (NSF) while Chalil Madathil has accessed support through NSF’s Research Experiences for Undergraduate (REU) supplements.

Their distinct undergraduate research initiatives have another thing in common: they engage students in authentic research to broaden their thinking and career aspirations.

“Telling them research is not something that certain people can do. Everyone can do research,” is Chalil Madathil’s key point with the community college students who participate in summer internships with CA2VES.

Both educators encourage their colleagues in the ATE community to leverage their NSF grants to provide community college students with research experiences. In separate interviews they explained how they have done it.

“If I see an opportunity that looks like I can impact students, I want to do it and figure out a way to support it,” Ashcroft said. He is the principal investigator of MNT-EC, which is located at the Pasadena City College in Pasadena, California. Ashcroft is an assistant professor of natural sciences at Pasadena City College.

Ashcroft’s favorite method for obtaining additional funds to support student learning is responding to “Dear Colleague Letters” that NSF releases about issues it would like current grantees to address. MNT-EC received an additional $1.5 million as a result of the proposal Ashcroft wrote in response to the Dear Colleague Letter posted after the Community College Undergraduate Research Experience Summit. The summit was convened in November 2019 by the American Association of Community Colleges with NSF support.

During 2021-2022, 30 community college students from across the country participated in the first full year of the Micro Nano Technology Collaborative Undergraduate Research Network that Ashcroft created with funds awarded based on his reply to a Dear Colleague Letter seeking projects to expand research opportunities for community college students. 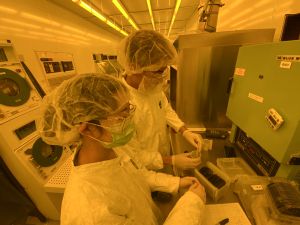 MNT-EC interns conduct research in a cleanroom at the University of New Mexico.

During the academic year the students met each Friday via videoconference for research-related presentations by one of 10 faculty mentors and other subject-matter experts. Throughout the year they also worked on lab simulations, wrote computer code, and interacted with peer mentors who have completed undergraduate research experiences.

During 2020-2021, the pilot year of the program, 10 student researchers went in small groups to the Support Center for Microsystems Education (SCME). SCME is an ATE center that utilizes the cleanroom at the University of New Mexico’s Manufacturing Training and Technology Center in Albuquerque, New Mexico.

For summer 2022 the student researchers had the choice of doing longer internships closer to their homes or to use a portion of their stipends for travel, room, and board expenses while conducting research at institutions farther from their homes.

Ashcroft said the idea behind this arrangement is to provide “different avenues for students to do research, to go to different places to do research. The students get to pick what they want to do,” Ashcroft said. He explained that the total costs of students’ stipends each year is about $150,000.

“Undergraduate research is really expensive if you want to pay students,” he said, explaining the cost exceeds what can be incorporated in most ATE centers’ standard grants. That is why he has pursued supplemental awards; they can be up to 20% of an ATE grantee’s current award.

Nevertheless, Ashcroft points out that if a principal investigator has an idea to expand a currently funded initiative in a way that aligns with topics covered in a Dear Colleague Letter, it puts the request in a competitive position. “Those Dear Colleague Letters can be impactful ... it’s stuff the NSF wants you to look at,” he added.

Another of Ashcroft’s recent Dear Colleague Letter proposals led to MNT-EC and Pasadena City College (PCC) students participating in NSF’s Supplemental Funding Opportunity for Skills Training in Advanced Research and Technology (START) program. It placed three PCC students in START internships at the California Institute of Technology earlier this year and three others in START internships at Keck Medicine of the University of Southern California in fall 2022. Both universities have NSF-funded Industry-University Cooperative Research Centers.

Kapil Chalil Madathil uses a mechanism built within the NSF funding process for grantees to request supplemental funds to support research experiences for undergraduates (REUs) with their projects. 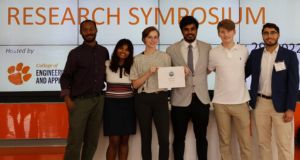 Since 2018 Chalil Madathil, who is co-principal investigator of CA2VES at Clemson University in Clemson, South Carolina, has used supplemental funding to bring two students from South Carolina community colleges and two from four-year institutions to Clemson to work on small research projects at CA2VES. For example, in 2022 he paired one two-year college student with two four-year college students to work on projects evaluating the efficacy of virtual reality systems to support technician education. CA2VES creates virtual reality simulations and other e-learning tools to increase the diversity and quality of the skilled technical workforce.

The process of obtaining the funding usually begins in early December when Chalil Madathil talks with Carter about CA2VES’s plans for the next summer’s undergraduate research experiences. After receiving formal approval, the staff of CA2VES sends announcements about the research internship opportunity to all 14 South Carolina community colleges and to other South Carolina colleges.

Applications are reviewed and the finalists are notified and invited to participate in the paid internships. Only the students are paid from the supplemental support. In 2022 the supplemental funding to CA2VES for the REU students was $36,000.

Over the years the REU students have assisted “with field studies, nationwide surveys, and data analysis [and] develop[ed] evidence-based guidelines on the use of digital learning,” Chalil Madathil wrote in an email response to follow-up questions. He explained that CA2VES enhances the REU students’ academic experiences with workshops and discussions about transitioning to their next stage of higher education.

Toward the end of their 12 weeks at Clemson the REU students write short papers and create posters about their projects that they present at Clemson’s College of Engineering Undergraduate Research Symposium. In the past, several of the REU students have also presented their scientific posters during student showcase sessions at the ATE Principal Investigators’ Conference held each October in Washington, D.C.

“That makes all the difference,” Chalil Madathil said of power of these culminating public presentations.

In 2009, when he was a master’s degree student at Clemson, Chalil Madathil presented his research at the ATE Principal Investigators’ Conference. He remembers it as an exciting, affirming experience. Prior to immigrating to the U.S. for graduate school Chalil Madathil earned his associate and bachelor’s degrees in India, where he began his career as a tool and die maker. Since completing his doctorate in industrial engineering at Clemson, he has risen through the academic ranks to gain tenure. He is now the Wilfred P. and Helen S. Tiencken Endowed Associate Professor of Civil and Industrial Engineering and the director of technology at Clemson’s Center for Workforce Development.

“Of course, yes” it is work Chalil Madathil when asked about the time involved in mentoring undergraduate researchers and overseeing their research. “I love doing this,” he said, adding it is a fun part of his job. He noted that Clemson’s Center for Workforce Development and the College of Engineering provide administrative support and professional development resources to the students.

“I am very passionate about undergraduate education and increasing the number of students pursuing STEM degrees at a graduate level. It’s fulfilling when I hear back from these REU students about how this experience changes their career trajectory,” he said.

Thank you for sharing informative content.
Tutoraspire.com originated from the idea that there exists a class of readers who respond better to online content and prefer to learn new skills at their own pace from the comforts of their drawing rooms.
The journey commenced with a single tutorial on HTML in 2006 and elated by the response it generated, we worked our way to adding fresh tutorials to our repository which now proudly flaunts a wealth of tutorials and allied articles on topics ranging from programming languages to web designing to academics and much more
https://www.tutoraspire.com/

Most important and useful information to every body. Thank you so much for shearing this idea
Very Helpful & informative blog.
Excelif.com Learn MS Excel Tutorial | Word Tutorial | Powerpoint Tutorial | Onenote Tutorial | VBA Tutorial | Power BI Tutorial | Qlikview Tutorial | Powershell Tutorial | Google Classroom | Smartsheet | Online Office Tools Tutorials Library on excelif.com has been developed to help both professionals and students to learn and develop their MS-excel skills. We at Excel Tip assist you in creating interactive spreadsheets for making calculations, performing reconciliations and maintaining employee reports, creating & for data management, auto-filter to sort records, V and H-Lookups for data sorting and much more. We provide tutorials on how to use Excel. Want to know more about Excel? Corresponding examples and features (500+ examples) We make Excel simple for you!
https://www.excelif.com/

We have a good news! This <a href="https://fachai9.ph/">fachai9</a> is opportunity to you.
There's a lot of rewards and you can enjoy all of games that we have.

This new <a hre="https://page365.ph/facebook-live-selling/">online live selling</a> method makes it easy for business owners to attract customers
and increase their bottom line. Use our Page365 to help you with any selling ideas.