As a graduate student Kapil Chalil Madathil chatted with Gerhard Salinger and V. Celeste Carter after they shook hands during the session of the 2009 ATE Principal Investigators’ Conference where student participants were recognized.

“That was an exciting moment for me,” Chalil Madathil said recently explaining that he treasures the photo that captured his meeting with the two National Science Foundation program directors who then co-led the Advanced Technological Education (ATE) program. He considers the certificate his first student award.

He has since received other accolades including tenure and $20 million in funding for research utilizing virtual and augmented realities in technician education, healthcare, and other domains. His area of expertise is the application of human factors engineering to the design and operation of highly interactive human-computer systems. His work draws on qualitative and quantitative methodologies – including ethnography, contextual inquiry, and controlled behavioral experiments – to understand how humans perceive, make sense of, and interact with human-machine systems.

Chalil Madathil is now the Wilfred P. and Helen S. Tiencken Endowed Associate Professor of Civil and Industrial Engineering, director of technology for the Clemson University Center for Workforce Development, and co-principal investigator of  the Center for Aviation and Automotive Technological Education Using Virtual E-Schools (CA2VES). The principal investigator of CA2VES is Anand K. Gramopadhye, professor and dean of the College of Engineering, Computing, and Applied Sciences at Clemson in South Carolina.

It was Chalil Madathil’s graduate assistantship work at CA2VES that first connected him to the ATE program, which he says remains close to his heart: “NSF ATE paved the way for me to be a successful researcher.”

Chalil Madathil is the rare tenured university professor who began his career as a technician. 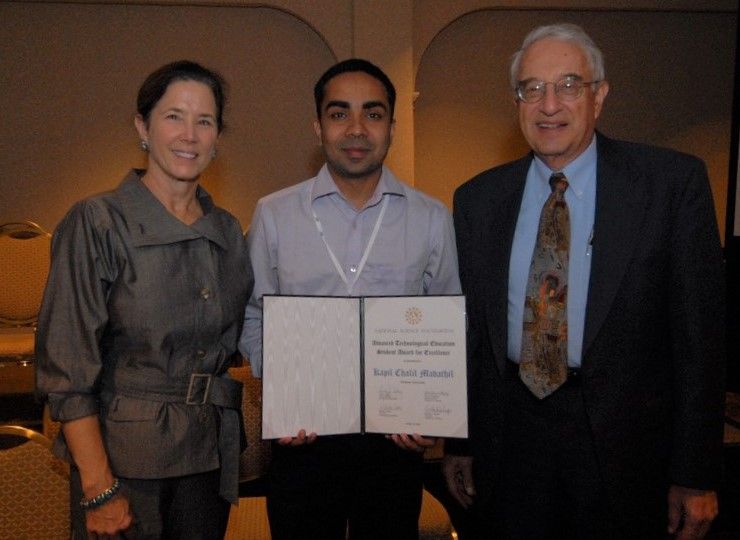 Kapil Chalil Madathil is now an associate professor of civil and industrial engineering at Clemson University.

As a teenager in India he was interested in how things were made. “I was just wowed by the way technology was used primarily to build a lot of these things out there,” he said. After earning an associate degree from the Nettur Technical Training Foundation in Bangalore, India, he worked for a year and a half as an automotive tool and die designer. Finding the work monotonous and wanting to learn more science, he earned a bachelor’s degree in mechanical engineering from Vellore Institute of Technology in Vellore, India.

Higher-level engineering work followed, but it did not come with the “freedom to make changes” that Chalil Madathil sought, so he followed the advice of senior-level professionals who recommended graduate school in the United States. He enrolled at Clemson in 2008.

In the early days of his graduate assistantship his technician’s perspective and systemic approach informed CAV2ES’s development of virtual reality simulations for instructing aviation technicians. “Because I’ve gone through a particular process, I understand what’s happening out there and what will make an impact,” he said.

There are still times when that background as a technician comes in handy. He serves on workforce development committees that make recommendations to the National Academy of Engineering and Manufacturing USA Institutes. He’s found that in discussions of big problems and frameworks for addressing them, “You need someone to translate things and make those activities tangible in real-life situations.”

Chalil Madathil has been a principal investigator or co-investigator for more than 30 research grants and awards, generating more than $20 million in funding from NSF, the Office of Naval Research, Department of Defense, Agency for Healthcare Research and Quality, industry, and other federal and state agencies. He is the associate editor-in-chief of International Journal of Industrial Ergonomics  and has published 45 peer-reviewed journal papers, three book chapters, and 63 conference papers in several high-impact venues.

Practicality and the desire to make educational content are woven into his research on how humans and machines interact, and how to capitalize on the capabilities of each. The human-in-the-loop studies he and his team create are often reconfigured to teach things like safety.

“All these things go back to the CA2VES funding that we initially had,” he said.

“It’s just not creating these kinds of simulations primarily for research purposes; we try to have a practical application for that simulation as such,” he said, acknowledging this approach appeals to funders too.

So, Chalil Madathil’s studies utilizing virtual reality range from healthcare to cybersecurity to military service personnel training. For example, he and his team of graduate students, instructional designers, and virtual reality developers have investigated how people use data to make healthcare decisions, how telemedicine technologies and other equipment can be used in ambulances to connect emergency medical technicians with specialists to improve patient outcomes, and how the “contagion effect” of dangerous challenges on social media can be minimized.

Many of the 140 simulations he has created over the years for ATE and other programs have been incorporated into EducateWorkforce.com, a digital resource that Chalil Madathil says has been used by 10,000 students from around the country.

“I feel that I’m making a small dent. Providing these resources to a wider set of students is simply amazing,” he said. EducateWorkforce’s arrangement of video lectures, virtual reality simulations, open texts, and interactive assessments grew out of the lessons the team learned through feedback to its CA2VES offerings, which were initially stand-alone virtual reality simulations.

And ATE continues to be a source of funding for new work.

Chalil Madathil serves on the national visiting committee of National Center for Autonomous Technologies (NCAT) and his team created the M8-R Sim, the virtual reality simulation of a remotely operated vehicle (ROV) that MATE Inspiration for Innovation (MATE II) utilized as part of its ROV competition in 2021. MATE II is a non-profit that grew from the Marine Advanced Technology Education (MATE) Center, which was an ATE center for 23 years; MATE II is an NCAT partner.

During 2021 Chalil Madathil also became the principal investigator of the ATE research project Exploring the Strategies Used by Two-year Colleges to Support Academic Continuity in STEM Education During the COVID-19 Crisis.

That project utilizes a resilience engineering framework to examine how educational institutions mitigated instructional challenges during the COVID-19 pandemic. “Because this is not going to be the last pandemic, we need to prepare ourselves for the future,” he said.