ATE Central: How did you become involved with ATE?

Delgado: Back in 2017, faculty and administrators wanted to develop cybersecurity degree programs at Miami Dade College (MDC). Dr. Diego Tibaquira, lead cybersecurity faculty member at MDC, and I, Dean of the School of Engineering and Technology at that time, decided to apply to NSF ATE with the goal to build faculty capacity in cybersecurity, create an advisory board, and develop courses with a focus on supporting minority students. That application was awarded the NSF ATE for small projects. 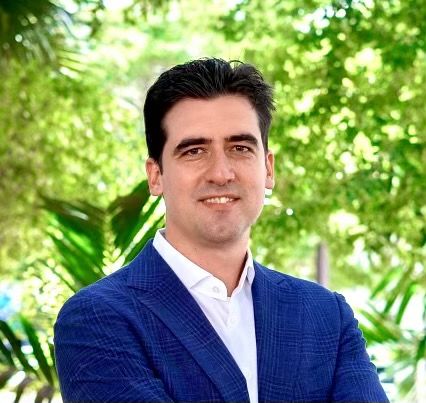 As part of the grant, we were able to have four faculty members trained and certified with multiple relevant industry certifications. We were also able to secure a strong advisory committee that guided faculty members on the curriculum development process. Those two elements allowed us to launch an Associate in Science in Cybersecurity and a College Credit Certificate in Network Security in only two years. Additionally, we developed courses mapping the most relevant industry certifications, which were covered for our minority students as part of the grant. By the end of the grant, in 2020, we had more than 200 minority students in the program and 20% of them already accomplished an industry certification. ATE funding helped us achieve all our initial goals and more.

ATE Central: Tell us about the goals of your project or center.

Delgado: After a successful implementation of our first ATE grant in cybersecurity, we decided to improve our cybersecurity program by (1) creating a stronger relationship with the local high schools interested in cybersecurity, (2) supporting our students to complete the degree on time, and (3) connecting our graduates with local jobs. As a result, we were awarded a second ATE grant called ASCEND (Advancing Strategies in Cybersecurity Education and Career Development) for implementation from 2020 to 2023.

ATE Central: What are some of the most valuable partnerships you've engaged in as part of your ATE related work?

Delgado: The implementation of the ATE grant in cybersecurity has led to great partnerships with industry leaders like Microsoft, IBM and EC-Council, as well as organizations like National CyberWatch. However, the most valuable collaboration has been with our own local K-12 system, Miami-Dade County Public Schools. The ATE grant opened a door for a strong partnership between our institutions to provide a cybersecurity pathway for students from high school to college, as well as training and mentorship for high school teachers in the field. Over the years of the grant, we have trained and certified over 30 teachers, which led to offering cybersecurity awareness sessions and courses at multiple high schools. We have served over 100 high school students in cybersecurity summer camps, with 70% of them continuing their studies in cybersecurity at MDC. More importantly, we have created an avenue to economic mobility with a particular impact on minorities from both institutions.

ATE Central: Could you share a bit about how you've collaborated with others within ATE?

Delgado: As part of our first ATE, we were able to learn about the Business Industry Leadership Team (BILT) model developed by Ann Beheler with funding from NSF ATE. At its core, BILT is an advisory committee on steroids that allows committee members to co-lead college-level programs of study by deeply engaging them in program review and/or development, and keeping them involved over time while creating vibrant pathways that produce work-ready graduates. The development and implementation of the BILT model on our Cybersecurity Advisory Committee was so successful that we decided to implement BILT in cloud computing, data analytics, and artificial intelligence. The collaboration with Ann Beheler and her unique model has changed how MDC approaches and interacts with advisory committees.

Delgado: Elias Marcet was a supervisor at a parking company when he came to MDC to study technology and start a new career. This happened at the same time that MDC was launching the first group of cybersecurity courses as part of the ATE grant, so he decided he wanted to focus on cybersecurity. Three years later, he obtained seven industry certifications as part of his courses at MDC, including CompTIA Security+, Linux+, Network+ and Cybersecurity Analyst (CySA+). He also finished his Associate in Science and registered for a Bachelor in Cybersecurity, and he got a job at Amazon in IT. Elias founded the cybersecurity club at his campus as well, winning multiple national awards and scholarships. He is an example of resilience and hard work. He is proof that we built a program that will change many lives, especially the lives of minorities like him who will get into high paying jobs.

ATE Central: Is there anything else you’d like to add?

Delgado: MDC is very thankful for the opportunity that NSF ATE has created to support community colleges in the development of emerging technology programs. The ATE grants awarded to MDC have led to over 500 students taking cybersecurity courses in less than 3 years. Additionally, ATE has supported the development of cloud computing courses and programs at MDC, and the increase of women students in MDC tech programs. On behalf of our students, thank you.