The potential of peer persuasion is the impetus for Girls in STEM, a video series that three teenage girls created with the Regional Center for Nuclear Education and Training (RCNET).

The brief videos of the girls interviewing young women about their careers as STEM technicians are on RCNET’s YouTube channel for educators to use and the general public to view.

“I think that it’s important to show girls my age that there are STEM jobs that don’t necessarily involve working in a factory or what you might think first comes to mind when you think of STEM,” Carmella Dunn, 17, a junior at Centennial High School in Roswell, Georgia, explained during a recent interview.

“The key point I hope the teenagers see is that there are many opportunities in the STEM field that are often overlooked,” Jadyn Cooper, 17, a senior at South Fork High School on Stuart, Florida, said in a separate interview.

Lindsay Raya, a junior at Fort Pierce Central High School in Florida, found that just talking about the video production raised her friends’ interest in STEM. “I think I have influenced my friends to go into the STEM field – just me talking about it all the time,” she said at the 2020 ATE Principal Investigators’ Conference where the three girls and RCNET Director Kevin Cooper, PhD, talked about the video series. 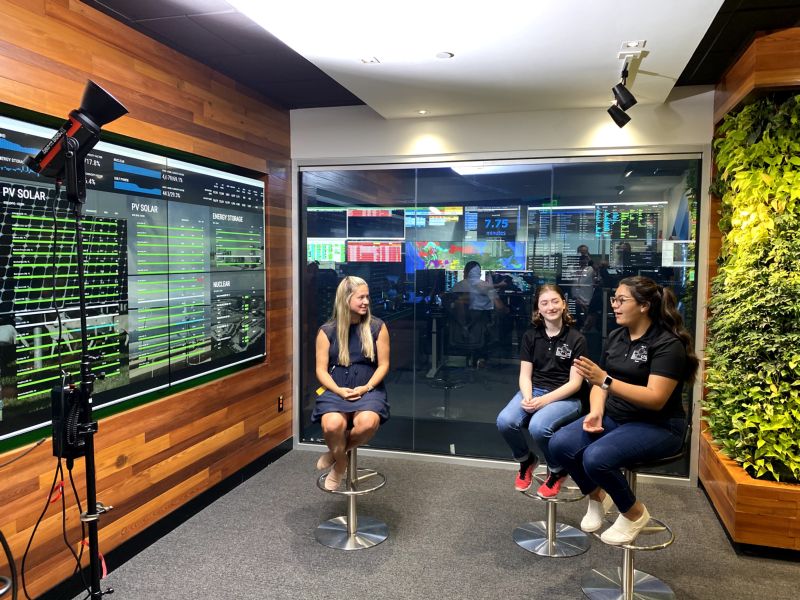 During that panel discussion Dr. Cooper explained that the idea for the Girls in STEM video series evolved from two things: the success of the center’s 2017 promotional video Women in Tech, which had thousands of views after then-President Donald Trump mentioned it in a Twitter post, and the blasé response to his 360-degree video interviews of technicians at nuclear power plants and solar fields.

After the positive feedback to the first video, Dr. Cooper, who is also dean of Advanced Technology at Indian River State College (IRSC)  where RCNET is located, produced the other videos himself using a 360-degree camera. Cooper thought the videos were a clever way to take viewers into unusual STEM workplaces. But when he showed them at high schools, the audience response was flat.

“I realized they didn’t want to see an ugly 40-something old man talking about those careers. They wanted to see from the eyes of themselves,” he said. So he recruited his daughter Jadyn Cooper and the teenage daughters of two friends, who are employed in STEM, to make the videos.

The three girls plan the productions, write the interview questions, and conduct the in-person interviews of young female technicians who are two-year college graduates. A professional editor at Indian River State College pares the hours of recorded content down into videos that range from two to four-and-a-half minutes.

All the girls reported being surprised by how much time was involved in planning the videos and the intricacies of recording the interviews. COVID interfered with their plan to create eight videos; four videos are posted on RCNET’s YouTube channel, and others may be made in 2022.

How the girls talk about the video production and their STEM careers plans offers insights for STEM educators.

For instance, Jadyn Cooper described a recent presentation by an IRSC instructor in her high school physics class as “very appealing.” But, she said, it would have been more persuasive if a college student had also talked with the students.

The reason, Jadyn said, is because she trusts people closer to her age more than a faculty member who has a stake in people enrolling in a program. She emphasized that it is important for young speakers to have “credibility.” So she recommends that young presenters be currently enrolled students who are genuinely enthusiastic and able to answer teens’ questions about STEM careers.

She also had recommendations about the timing of presentations.

“You need to target the younger – not the senior-year students – the sophomore and junior-year students who are trying to figure out what they want to do. Senior year they are pretty decided because they have to be decided. So when you target the tenth and eleventh graders you are planting an idea in their head[s] of a career that could be meaningful, that could provide a lot of help to the world, and expand their programs. And a lot of people just don’t know where to find the resources,” she said.

Dunn said it’s important for faculty to place STEM jobs in a context that seems manageable and attainable for teens. “It’s important to share with everyone else that STEM isn’t necessarily just inventing, but it’s other things as well,” she said.

She also suggests that faculty show teens that if you go into a STEM field you can “work a normal job.” By “normal” she means nine-to-five jobs in an office or lab. The two videos that the girls created from their interviews with technicians at a forensics lab clarified that point for her.

Prior to those interviews she was unaware of the wide variety of STEM degrees that the people who analyze crime evidence have earned.

“You might not think off the top of your head that’s like an engineering degree. But it is, and it’s a really cool type of engineering,” Dunn said.