In 2007 when the owners of a nearby winery suggested the Highland Community College-Wamego offer winemaking classes, Scott Kohl knew nothing about wine production. He wasn’t even a wine drinker. But as the director of the satellite campus, he was persuaded and gathered information to create the curriculum for a three-credit Introduction to Grape Growing course. When 17 students enrolled – one drove three hours to attend – Kohl was impressed that the college could respond to an unmet need. Enrollment was similarly strong when the college added an introductory winemaking course.

In 2008 Highland leaders agreed to join the Viticulture and Enology Science and Technology Alliance (VESTA), not only to help the center funded by the National Science Foundation’s Advanced Technological Education (ATE) program expand its online viticulture and enology degree program throughout the Midwest, but to reconfigure VESTA’s curriculum for in-person courses.

“From there things just started to grow,” Kohl said. Indeed they did.

For more than 10 years the small rural college has offered enology and viticulture certificate and associate degree programs. The teaching vineyard it started with VESTA support has grown to four vineyards with 5,200 vines. Most remarkably, the college created Highland Vineyards and Winery, LLC. The limited liability corporation is the business branch of the Highland Community College Viticulture and Enology Program and operator of 456 Wineries, a wine business incubator that is located across the highway from the campus. Income from sale of wine made with the college’s grapes, the rent paid by the wine incubator tenants, and grants help sustain the program that enrolls about 16 students per year. Many alumni are the owners or employees of the 60 wineries that now dot Kansas; the state had 12 wineries in 2007, Kohl said. 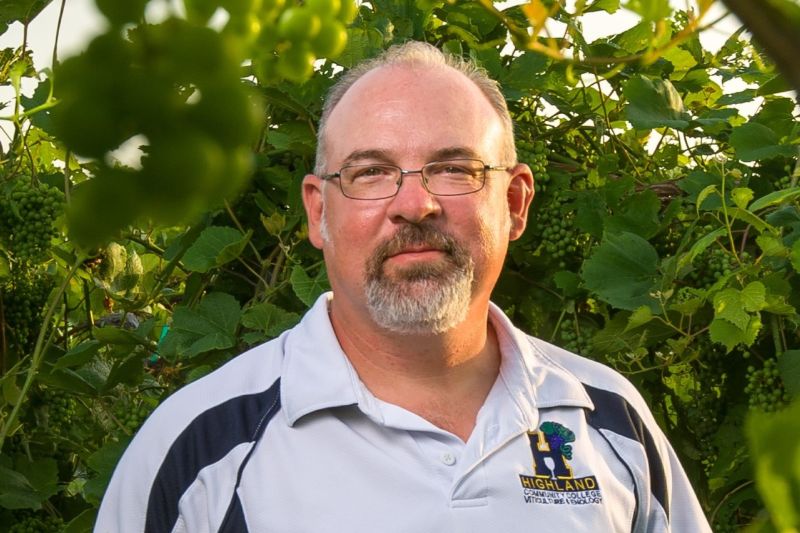 While Kohl has nurtured the program from planting the first acre of vines himself to writing grants, he attributes the program’s success to VESTA.

“Joining VESTA is what breathed life into the program,” Kohl said during a recent teleconference interview.  Kohl is now director of the Viticulture and Enology Program at Highland Community College and manager of 456 Wineries.

Michelle Norgren-Brewer, VESTA director and principal investigator, appreciates Kohl’s acknowledgement of the role VESTA played in the development of Highland’s program and confirms that it is unlike any other program currently in operation at a public community college in the Midwest.

The Power of VESTA

“The power of VESTA is it plugs the holes. You can start a program as Highland did out of the starting gate with no instructional faculty. No equipment. No anything. We can get you off the ground. You can host some of the classes. The [online] instructors can come from all over and they’re experts in their field,” Norgren-Brewer said.

For some colleges the hardest thing is getting the viticulture and enology courses approved by the college and state, Norgren-Brewer said. But Highland did that early on; the state university agriculture programs were fine with Highland taking the lead on this specialty crop. When the college joined VESTA it became a sub-awardee of VESTA’s ATE grant from National Science Foundation. Kohl used those funds to buy vines to start a teaching vineyard. He also served as VESTA’s state coordinator for Kansas. Kohl was a co-principal investigator for VESTA's subsequent regional and center ATE grants.

During a video-conference interview Norgren-Brewer explained that VESTA started in 2003 in response the grape and wine industry in the Midwest. The center’s mission broadened to the entire US as the craft-wine industry grew. “There was a strong interest across the country for craft beverages. It’s all a part of the buy-local, stay-local, shop-local – that whole drive that has been going out across the nation for awhile, and it helped support us,” she said.

Climate change and West Coast wildfires have recently increased interest in cultivating wine grapes east of the Rocky Mountains. Winery start-up costs are significant, but setting aside as few as five acres for grapes can – after several years – yield enough fruit to be more profitable per acre than row crops like corn or wheat.

VESTA always focused on the science of cultivation and winemaking. When it became clear that most of its students were taking classes to start wine-related businesses as second careers, VESTA added entrepreneurship courses.

Since 2003 VESTA has had 14,104 enrollments from 48 states, the District of Columbia, and 13 countries. The average age of VESTA’s students is 47; 70% of the students have already earned a college degree prior to enrolling in a VESTA course.

“We’re training the owners, the growers, the winemakers, which is actually all the same person. Getting them educated so they can grow their business [and] so they, in turn, can hire people and get them trained,” Norgren-Brewer said.

Early in her career Norgren-Brewer taught chemistry at rural high schools. That experience of traveling from school to school with a portable lab to instruct small groups of teens influenced her design of VESTA’s network of 600 practicum sites. “Online instruction has a lot of power but I don’t want to go to a doctor who learned everything via Zoom. I want somebody who's actually practiced,” she said. To her it’s important for people to get “sticky and dirty” cultivating grapes and making wine so they are fully informed and well prepared to carry out the technical aspects of both enterprises.

VESTA vets the practicum sites. But it is up to students to make the connections at the vineyards or wineries for them to do hands-on assignments for online courses or do internships. VESTA’s collaborative agreement with its partner institutions means students pay the same tuition regardless of their location or where the VESTA instructor’s home institution is located. Students’ lab fees cover the stipends that VESTA pays practicum supervisors who typically mentor one student at a time.

Kohl said having VESTA’s curriculum was essential to launching the in-person program that Highland Community College’s president and trustees wanted in 2009 and have consistently supported since. Being able to access the technical expertise of VESTA’s leaders and instructors from around the US helped him and his colleagues at the college figure things out as the program evolved.

External financial support has also been critical. In 2013 the college was awarded an ATE project grant to add commercial mechanization curriculum and equipment. In 2016 it received a USDA Rural Development grant and a Kansas Department of Agriculture grant that provided the money to hire a winemaker, who also serves as the enology instructor, and to purchase equipment for a winery incubator.

Kohl describes the incubator as a “dream” that he thought would take about 10 years to happen. But in 2018 “the stars aligned” for the college to acquire a contiguous property with a building that could be renovated for wine production and a tasting room. The incubator, now known as 456 Wineries, opened in October 2019.

The incubator tenants are independent businesses that must have state and federal licenses before they move in. They must supply their own fruit, bottles, and labels. But in a highly collaborative environment they share the crush pad, fermentation tanks, bottling equipment, and space in the tasting room.

“Leasing equipment and space really lowered the bar financially to start a winery,” said Bob Bodine, one of four current tenants of the incubator.

Bodine had a degree in food science and industry from Kansas State University, but enrolled in Highland and VESTA courses to learn about the wine industry after he added a small vineyard of Chambourcin grapes to the row crops of wheat, soy beans, and corn on his east Kansas farm. “I went into grape and wine production as a way to add a value-added product to my farm,” he wrote in an email. He completed the viticulture curriculum and was awarded an associate in science degree from Highland Community College in 2015; in 2018 he completed the courses for an enology certificate.

Bodine Wine Company moved in to the incubator shortly after it opened in 2019. Bodine reports it has been “great!” He explained that “having an experienced enologist there to answer my questions [is] invaluable. Selling my and others’ wines in the tasting room has allowed me to practice describing wine and telling my story. Also, I’m learning what wine drinkers in this area like and buy.”

Nicole Clark, a Kansas native who worked in the wine industry in California, is Highland’s winemaker. She teaches enology at the college and serves as a mentor to the incubator tenants, offering advice on everything from scaling production to operating commercial-grade equipment. Candice Fitch-Deitz, who previously served as VESTA's Illinois coordinator, is the viticulture instructor at the college and manager of Highland’s vineyard. She is also a co-principal investigator for VESTA's current resource center grant. As director of the viticulture and enology program at the college and manager of 456 Wineries, Kohl’s responsibilities range from assisting students to booking musicians and food trucks for winery events and helping with vineyard operations.

Bodine plans to expand his vineyard with different cold hardy grape varieties and open a farm winery outlet in a nearby town. “Leasing from 456 has allowed me to build inventory, and gain experience making and selling wine without a large financial investment,” he wrote.