Esteban Montero Chacon, 40, was hired as a residential energy analyst in October 2020 while he was finishing his associate in applied science (AAS) degree in energy management from Lane Community College. By December his boss was so impressed by the way Montero Chacon revamped the agency’s Heat System Crisis program that he told him to apply for the director’s job from which he would soon be retiring.

Montero Chacon did, and in February 2021 he became the director of the Energy Services Division of Homes for Good, a public housing agency in Lane County, Oregon.

“I don’t believe I could do the job [without the program], because number one, that’s how I got here by being an energy technician myself. And number two, is just the fact that I learned a lot not only in the technical field of energy, but there was a lot to be learned about energy policy and politics and all the different things – all the guidance, the regulations, ventilation needs and such – that come into play and represent a big role in what my job is,” he said.

Montero Chacon is particularly grateful to Roger Ebbage, the faculty lead of the Northwest Water & Energy Education Institute at Lane Community College. It was Ebbage who told Montero Chacon of the energy analyst job at Homes for Good in 2020, and it was Ebbage who encouraged him to enroll in the energy management program at Lane Community College in 2017.

Ebbage has been the principal investigator of several Advanced Technological Education (ATE) grants from the National Science Foundation including Award 1601375 that supported the conversion of Lane’s in-person energy management degree program for online delivery. He is currently co-principal investigator of the Center for Renewable Energy Advanced Technological Education, which is hosted by Madison Area Technical College in Wisconsin. 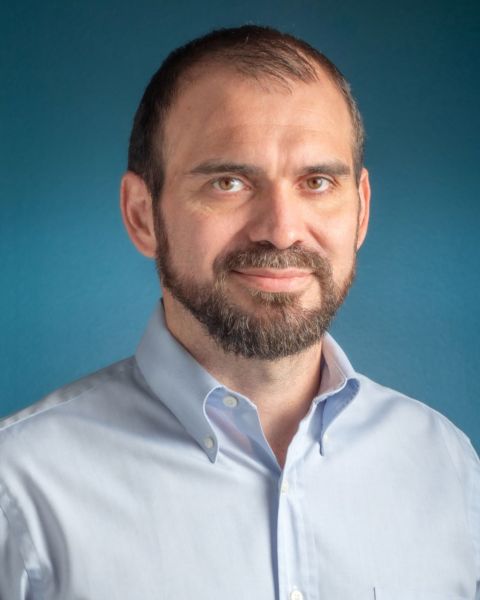 That first conversation between Montero Chacon and Ebbage occurred when Montero Chacon called the college from Costa Rica with questions about the program. At that time in 2017, Montero Chacon and his wife, Auriana Koutnik, were both working for the U.S. government in Costa Rica. Following a pleasant vacation in Oregon, where they have friends and family, they had decided that in three or four years they would like to move to Eugene. Montero Chacon had been looking through the college’s course catalog when info about the energy management program caught his eye.

Montero Chacon, who had attended college but not completed a degree, describes himself as the “trailing spouse” to his wife’s career as a humanitarian. She works for USAID’s Bureau for Humanitarian Assistance. With their youngest child in pre-school he wanted to go back to college and study something “that could impact more lives.”

As a young man, he had gone to mechanic school before settling into an interpreter job. He eventually specialized as a pediatric medical interpreter. He also spent several years as the stay-at-home parent for their two children before becoming the assistant community liaison officer for U.S. State Department in Costa Rica. Montero Chacon is a native of Costa Rica who became a U.S. citizen.

In 2017 Ebbage had completed his ATE-grant funded conversion of the college’s energy management degree program for fully online delivery. He assured Montero Chacon that he could complete the program all online, even from Costa Rica.

Montero Chacon said he and Ebbage “clicked” during that phone conversation and that he liked Ebbage’s sustainable energy philosophy for the program.

“The core idea of energy management is that you are trying to find a middle ground, right? It cannot just be reduction, or more production; it cannot be just be more efficient. It has to find a balance there, right, and that’s kind of what drove me to it. As a society we’re still trying to be comfortable. We still want to have all these things, but we have got to find a balance. We’ve got to find an efficient way to do it. And I figured, ‘Hey, this is exactly what I want to do. This is the kind of thing I want to help people do,’” Montero Chacon said of that first conversation with Ebbage.

Montero Chacon enrolled in Lane as a part-time student because he was working in Costa Rica and began taking pre-requisites. He was midway through the energy management program when the family moved to Eugene in August 2019.

After the move he continued to take online courses. Occasionally he and other students attended in-person demonstrations. Students outside of Oregon satisfy hands-on requirements by connecting with practitioners near them, which the program calls fieldwork mentors. Students make the connections with the fieldwork mentors and the program verifies the mentors’ qualifications and students’ work.

Montero Chacon finished his AAS in energy management in early 2021 while working full time supervising a nine-person team at Homes for Good.

The team’s work begins with energy auditors’ analysis of a home’s energy use. It then develops a holistic plan to weatherize the home, including new double-pane windows, floor and attic insulation, replacing inefficient furnaces and water heaters, and lighting. The team uses federal grant funds along with funds provided by local utilities to cover the costs.

Montero Chacon is happy knowing that his work focuses on reducing the burden of energy costs for low-income people. He hopes that eventually installing renewable energy systems will be something the agency can offer, but for now he is glad to help people conserve energy and reduce the portion of their small incomes that go toward heating and lighting their homes.

“It doesn’t matter where your energy comes from, if you are using too much, that’s not OK. Starting by the fact that we are tackling how much energy we are using, it’s definitely a good principle. And the cleaner we can get that energy the better, well the better it keeps being. Yes, I think we are on the right track,” he said.